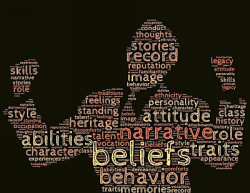 The Influence and impact of Beliefs

A story which has left an indelible impact on me is of a baby elephant, which is tied up to a tree with a chain so that it does not get lost in the jungle. With time, the baby elephant grew up to become a full-size giant but the chain and tree remained the same.  The full-grown elephant continues to belief that the chain and tree are strong and it cannot run away by breaking them.
This story tells me that we all grow up with beliefs and carry that baggage along.  If the full-grown elephant wanted, the chain could have been broken; tree uprooted.  The belief system kept telling the elephant that the chain and tree are stronger.
We, as humans are no different.  As we grow, the belief system gets embedded and is formed out of our past experiences. Very often, the belief works as sub-conscious mind and keeps pulling us back every time we want to bring about any change.
Most of our behaviors emanate from the Beliefs.

Belief as a lens

What then is Belief all about.  Belief is described as a feeling of certainty, assurance and permanence leading at times to rigidity. It gets formed over a period of time by what experiences one goes through.  It stands on the pillars of Experiences, References and Interpretations.
The origin of Belief is more often from a logical understanding leading to a opinion through feelings and over a period of time leads to conviction.
A Belief is a feeling of certainty about something, that is how we see ourselves, others and the world.
In fact, Beliefs are one of the important filters and lens we use to interpret the world.

We become opinionated many a times that the Beliefs are always negative, but the beliefs can also be positive as well.

Belief system makes a person get into an auto-pilot mode and keeps rejecting any new inputs that comes their way.  However, new beliefs do get formed. The reflections and introspections in the Coaching conversations do lead to a shift in belief showing up transformations.
New belief gets formed due to re-wiring of references and experiences leading to new interpretations.
In the Coaching conversations, I have seen the behaviors which are just the tip of the iceberg. The deep dive leads to the beliefs which are exhibited while the Coachee is going through reflections.
The potential in the Coachee is unearthed as the shift in Beliefs takes place in the Coaching journey. As one builds the Coaching muscle, the ability to ask those killer questions makes the Coachee reflect into their references and experiences and change their interpretations.
While crafting this article, I was reminded of all those transformations the Coaching sessions have led to, basis the shift in belief.
What have you experienced in the shift of belief leading to transformations.
I look forward to learning from your experience.

2 thoughts on “The Influence and impact of Beliefs”

7-year-old me: What should I draw? 10-year-old elder brother: What would you like to draw? Me, hoping I will get some ideas: I don’t know. You tell me na? Bro (absolutely unperturbed): But how can I tell you what to draw when it is you who wants to draw? Me (sighing): Arggggg!! This is how … END_OF_DOCUMENT_TOKEN_TO_BE_REPLACED

Are you the parent of a teenager? Do you find it increasingly difficult to talk to them? All the mood swings, the sulky looks, the “I’m fine” and “Whatever!” No matter how hard you try you just can’t seem to understand him or her? Parents want their teenagers to be confident and happy. To be … END_OF_DOCUMENT_TOKEN_TO_BE_REPLACED

I have trained … I have learnt new skills … I have practiced these skills under different environments … I am ready.. Let me tell you my journey of learning to drive… I was 14 years old. My Dad was catching an afternoon nap and his car was parked in the garage. Over the years … END_OF_DOCUMENT_TOKEN_TO_BE_REPLACED

Close to four decades in corporate life,  I have seen a lot of effort in ‘Behavioral Change’. This is very one dimensional and I knew I had to go deeper than Behavior to really start making lasting Behavioral Change. Below is a snapshot of my research and my reality. “Leadership is a choice, not a … END_OF_DOCUMENT_TOKEN_TO_BE_REPLACED

It was on a fine day on Jan 2020, It was very accidently that I came across a mail and somehow my curiosity took me to explore the website. I talked to the respective person and was not sure about if for 4 months and just thinking. While I was busy with my routine jobs … END_OF_DOCUMENT_TOKEN_TO_BE_REPLACED